Michael Falkenstein
When we turn to the pictorial works of Michael Falkenstein, the first thing that strikes us is that – at least as far as I have come to know his things – they are exclusively woodcuts. The usual sequence in the printing process is: the creation of a print template in this case the carving of the motif into the printing block made of wood, application of the printing ink with the use of which as many similar impressions as possible are made on paper. It is apparent that things are different with Michael Falkenstein works, because he does not only present prints on paper, but sometimes also the printing blocks. The two portraits that you may have seen in the aisle parallel to the nave are only available as printing blocks so far, which means that no prints on paper have been made yet. While hanging these two portraits, Michael Falkenstein said he didn't even know if he should make prints of them. Therefore the proper description of his art would be that Falkenstein makes reliefs and often prints from them. I find this quite wonderful, because the usual hierarchy of destroying the printing plate ¬– as a slave to the printed image ¬– after the work is done, is simply suspended here. Here the slave may also be the master. Usually there are only three prints from the elaborately carved plate, which is so few that one pauses. Falkenstein seems to use his technique to make images scarce and slow them down. His crinkly carving, (a phrase he liked so much he asked me to be sure to use it in the introductory text), is exceedingly rich in detail, whether he's devoting himself to a waterfall or a modular synthesizer. In particular, he captures what is quickly gone: splashes of water, a fleeting glimpse, temporary plug-ins of cables that are pulled out of their sockets a second later and never come to rest on the floor the way they did that one time. To me, his works also seem to be a kind of anti-cell phone snap pictures. He juxtaposes his one image with the thousands of photos taken during a concert. In black and white, crinkly, a pause carved in wood, so that we know that this moment really existed and that it doesn't matter where we fix our gaze. The ground at our feet has as much to tell us as the sky above our heads.
Text: Christian Deckert

Roman Klonek
Roman Klonek represents the traditional printing technique "woodcut" in the contemporary art scene, which is strongly influenced by the variety of digital possibilities. Looking at Klonek's work, one quickly recognizes his preference for very reduced forms and often animal-like creatures, which at times recall the birth of the comic strip. The characters that populate his world are anything but superheroes. Rather, they could be described as guinea pigs waiting for their destiny in the draftsman's laboratory. He holds the strings, sets traps for his protagonists, puts his foot in his mouth and then observes, together with the viewer, what will happen.

Inessa Emmer creates dreamlike images that play with our visual habit. Landscapes, animal portraits and still lifes which in their combination make no logical sense. This allure of the surreal in the combination of technique and colours seduces the viewer into a mysterious pictorial world. The result of her works are large figurative paintings that attract mainly through bright colours and convince within a clear composition.

Emmer's art is characterized by sculptural formal thinking. The artist develops her pictorial ideas from various characters. She painstakingly cuts individual printing blocks into figures. She presses the printing plates onto the canvas with her body. All motifs in the picture are additively applied by the woodcut. The artist prints the different colours several times on top of each other on the nettle cloth. As a result, the colouring does not spread evenly on the canvas, but creates a lively pattern of different colour nuances. Characteristic for her woodcuts is the combination of two cutting techniques. On the one hand, she uses gouges to cut the figures into the wood, and on the other, she uses a saw to make stamps for the striking parts of the work. Inessa Emmer determines the basic composition of the pictorial space beforehand, on which she lets the motifs play.

Maritime scenes, grasslands and closeups. In her contemplation, the artist stages a mysterious story. Emmer transfers animals into human roles. They fish and fly, she shows activities from leisure time. Fractures appear in the groups of figures. Things do not fit together and irritate the viewer. In a humorous way, the artist makes impossible things happen. Where are we here? Is this still part of our reality? The surrealistic woodcuts do not follow any narrative logic in their overall conception. Inessa Emmer reinforces the surreal break through an unusual choice of titles, such as: "Highway Exit, Sour Cream or Pot Whipping" make the image appear in a different light. In what way does the title tie in with the motifs? Here begins the puzzle of the artist's pictorial worlds. Her figures come from her native environment and memories of her past, which serve as inspiration to this day.

The woodcuts of Inessa Emmer captivate with a lively selection of figures in combination with a special colour scheme. Her simple compositions contrast with a dynamic colour surface and enigmatic motifs. Her narrative images show an imaginative world that allows room for individual interpretation.
Text: Wilko Austermann

Philipp Hennevogl
In his finely structured and detailed linocuts, Philipp Hennevogl shows himself to be an observer of contemporary everyday life and its specific world of objects. His outstanding and printmaking work fascinates with urban everyday scenes as well as with close-up views of nature and large-format landscapes. 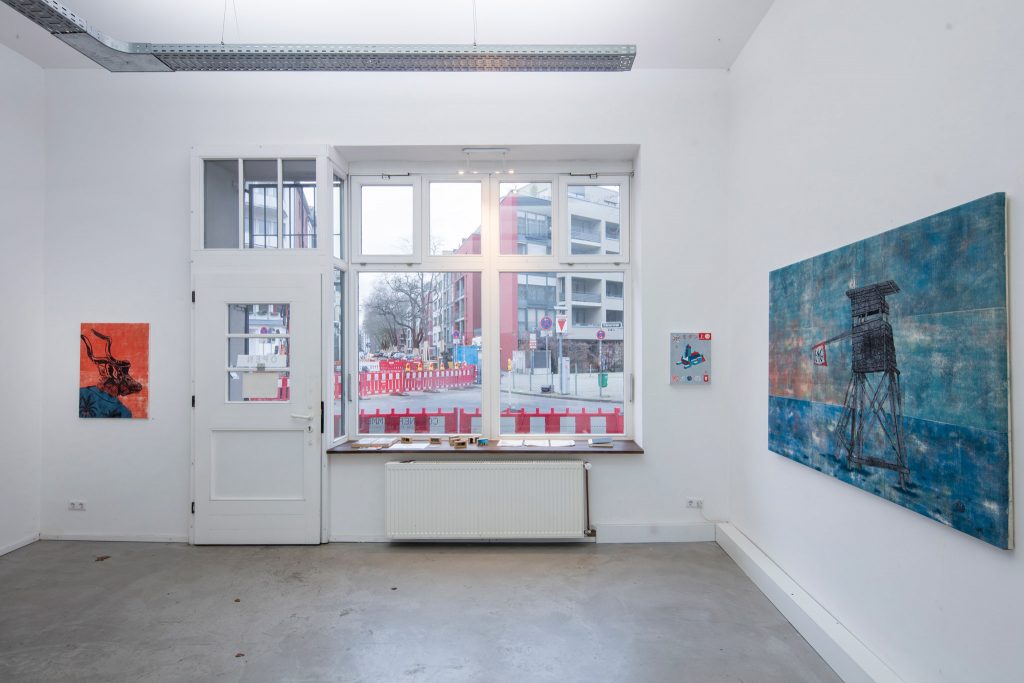 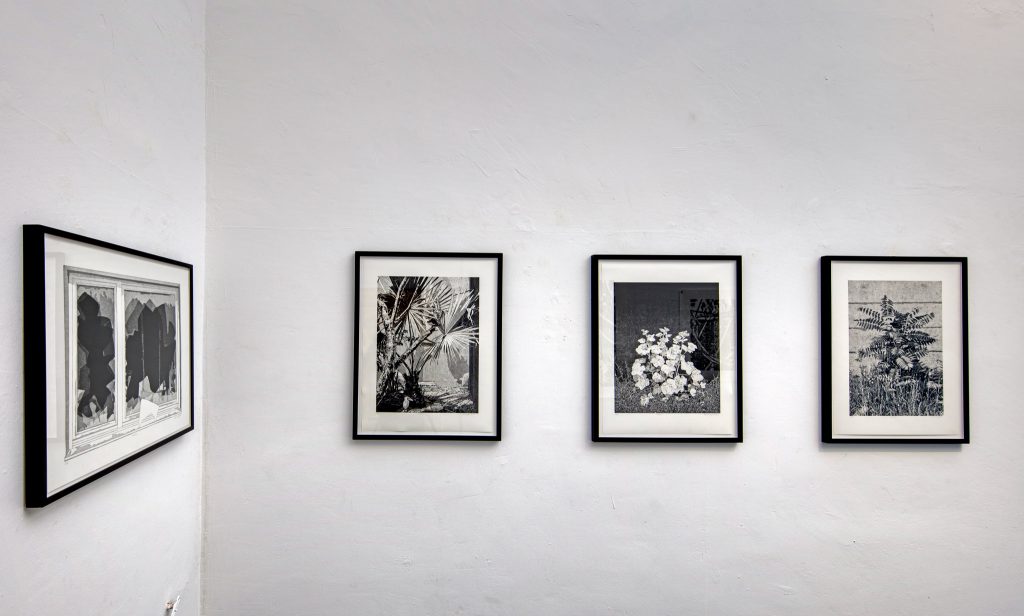 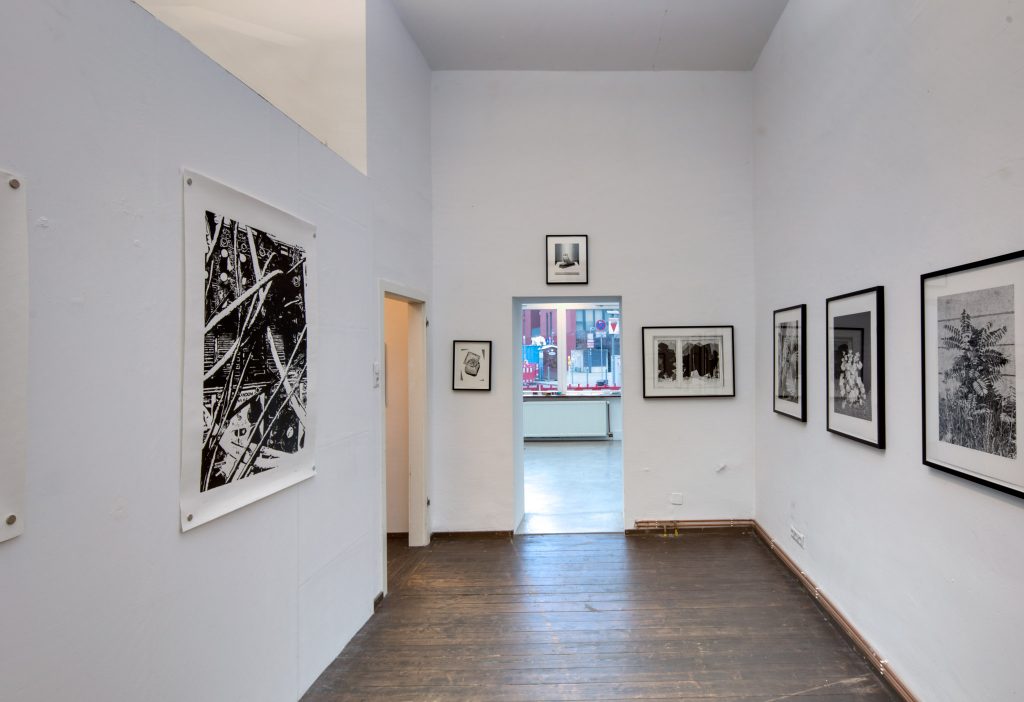 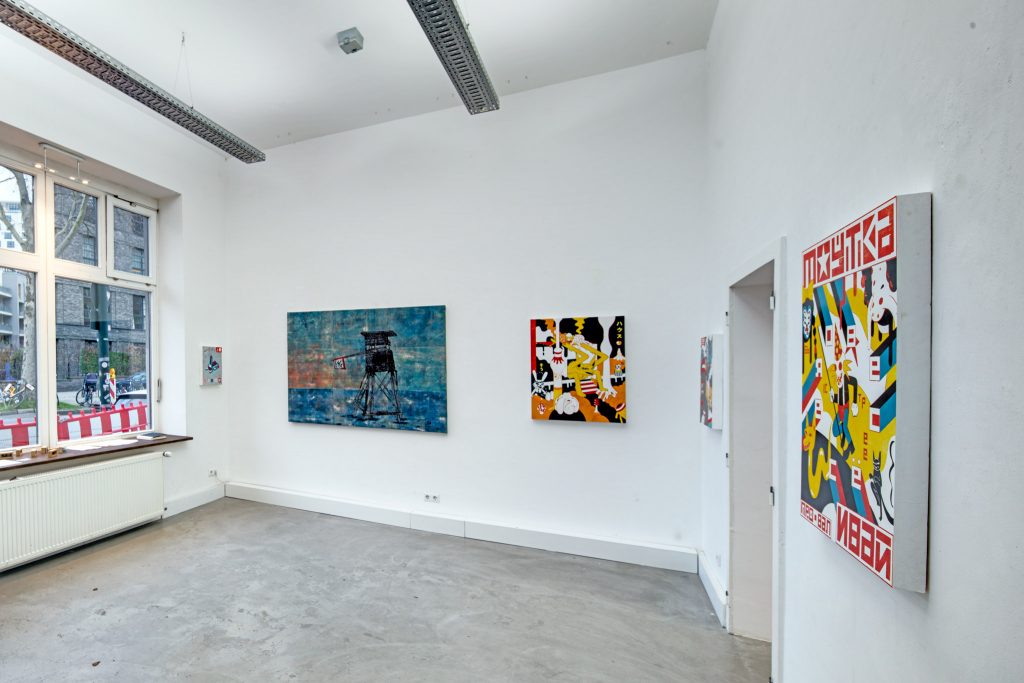 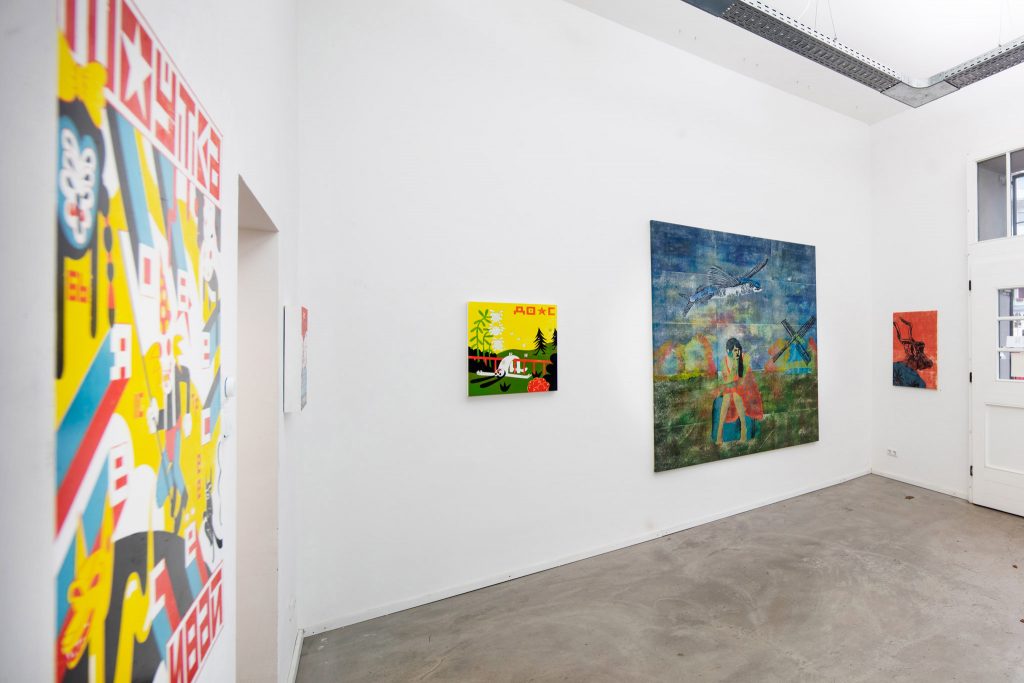 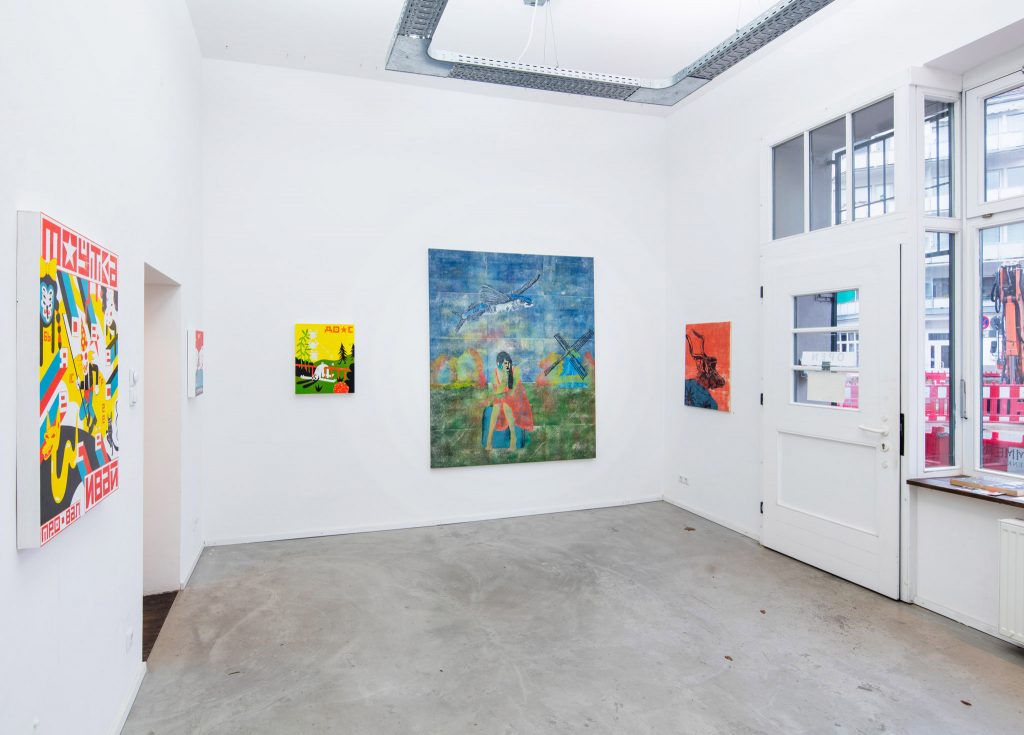 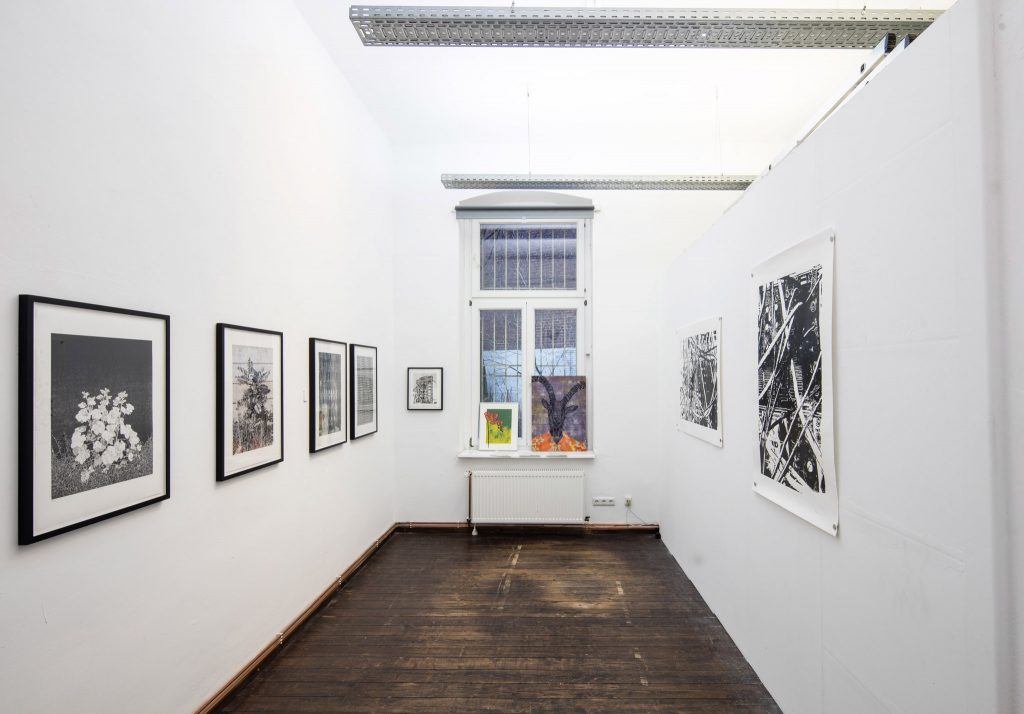