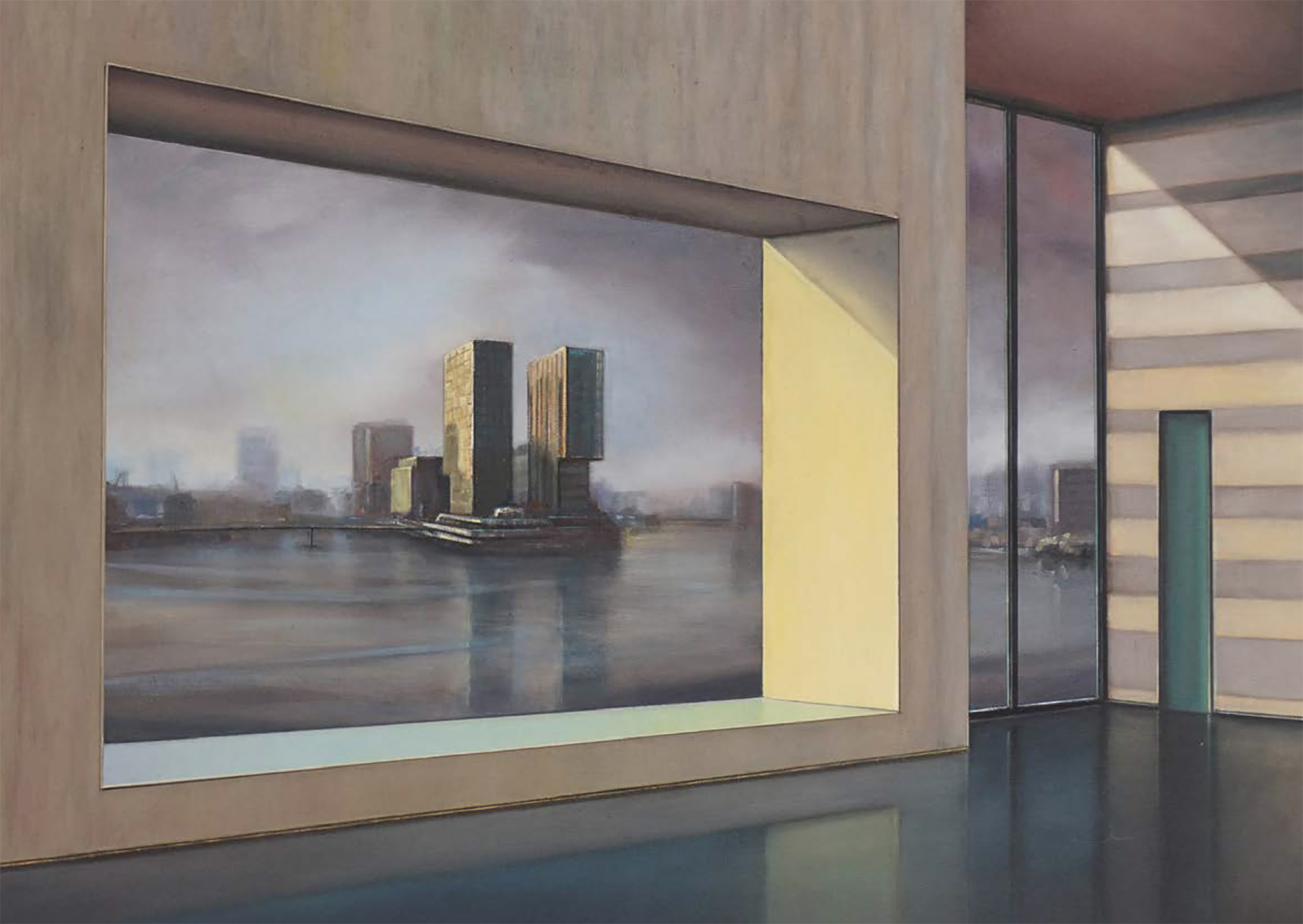 Tobias Stutz was born in Filderstadt in 1983 and lived in Scotland from the age of three to six. After completing his community service (ADA) in Northern Ireland,Belfast, he studied painting at the Academy of Fine Arts in Nuremberg under Professor Fleck. He received scholarships in 2007 and 2010 and was included in the Lfa Bayern art calendar in 2010, which is not unimportant, especially for young artists. His works, which he has regularly shown in public since 2005, have just received the VR-Bank Erlangen prize.

An artist like Stutz, who reproduces so matter-of-factly buildings or furniture of classical modernism clearly works with the recognition value of things. People are usually absent from his pictures, but design objects and architecture are staged with all the more precision. In this way, the buildings become representatives of the clear, reduced formal language of the international style that emerged at the Bauhaus at the beginning of the last century. Stutz also depicts its characteristics: the flat roofs, the generous windows or window walls and the chrome supports, which are the hallmark of Mies van der Rohe's skeletal architecture. The depiction of real buildings, such as the Barcelona Pavilion "Pavilion at Night" from 2016, is achieved in Stutz's work through the subjectively chosen detail. This makes the elegance as well as the radicality of the architecture clear. „Casestudyhouse" No. 22 from 2017, a case study house by Pierre König (1959-60), is located above Los Angeles. When one is inside this building designed by linear rigour, right angles and permeable walls, one experiences a principle of classical modernism, which means that the surroundings are brought into the building through the window cut-outs. This is a concern of classical architecture, which generally asserts itself like a stereometric foreign body in nature. It wants to make nature visually present by means of the large windows inside. Stutz expresses this in his picture with the view of the Matterhorn. It is the cropping that makes many of his pictures so appealing. The details are arranged in such a way that lines and surfaces, as well as horizontal, vertical and diagonal lines, harmonise in concentrated, almost photographic precision to form a reduced whole. And it is always the borders of the pictures, i.e. the frames, that make up the cut-out in its composition and minimalism.

Stutz also directs the gaze to mundane, unspectacular interiors. Thus, he reproduces the illusion of spatial and plastic conditions using the example of Bauhaus kitchens. Their corners and edges, their colour contrasts and their special rhythm of lines, surfaces and bodies underline their constructive and abstract aesthetics. The view at the place where the corridor bends and where we get an idea of a bright room flooded with light is not disturbed by any superfluous details. Even the picture within the picture with the same motif does not irritate, but blends in as a matter of course.

Some small-format works in this exhibition are surprising. For example, Stutz depicts museum visitors immersed in abstract paintings and coming to rest. According to his own statement, the painter simply felt like painting people. Yet the motif of immersion is an important one in classical modernist painting. The encounter between art and the viewer in the museum is also a frequent theme in contemporary photography. Stutz's works repeatedly reflect his preoccupation with art in general. Thus, his rooms, like those of Edward Hopper, emphasise light and shadow. He is therefore often asked about his relationship to Hopper. These questions encouraged him to approach Hopper images in a series and to quote them bluntly. Thus the painting "Morning Sun" is a Hopper painting, but without the woman sitting on Hopper's bed, lost in her thoughts, looking out of the window. Whereas in Hopper's work emptiness and melancholy spread, the Stutz version is free of them. In Stutz's work, a banal safe door or a simple window are captured in their graphic and planar tensions and thus in their pictorial quality, or rather invented by him. The yellow of the extended awning, with its warm solar energy, conveys something like the epitome of a summer in the south at midday. The fact that Stutz often ignores the function of windows, because one cannot look out of them and because one cannot look into them, shows his particular artistic approach. The painter wants nothing more than to copy the relationships of form, line and surface from the things of reality. This ultimately leads to abstract relationships of form that almost dissolve reality in light and shadow as well as in densely painted and transparent surfaces, dematerialising it. Tobias Stutz depicts spaces which, due to the absence of man, are not living spaces, not spaces of action. Jochen Meister speaks of "places of vision" and of "pure looking" to which Stutz invites us. By omitting the figures, the clear construction comes to the fore. This creates an expression of purity, as nothing disturbs the viewer's gaze. The viewer can come to rest. No narrative, no mood is imposed on him, he can remain entirely with himself. 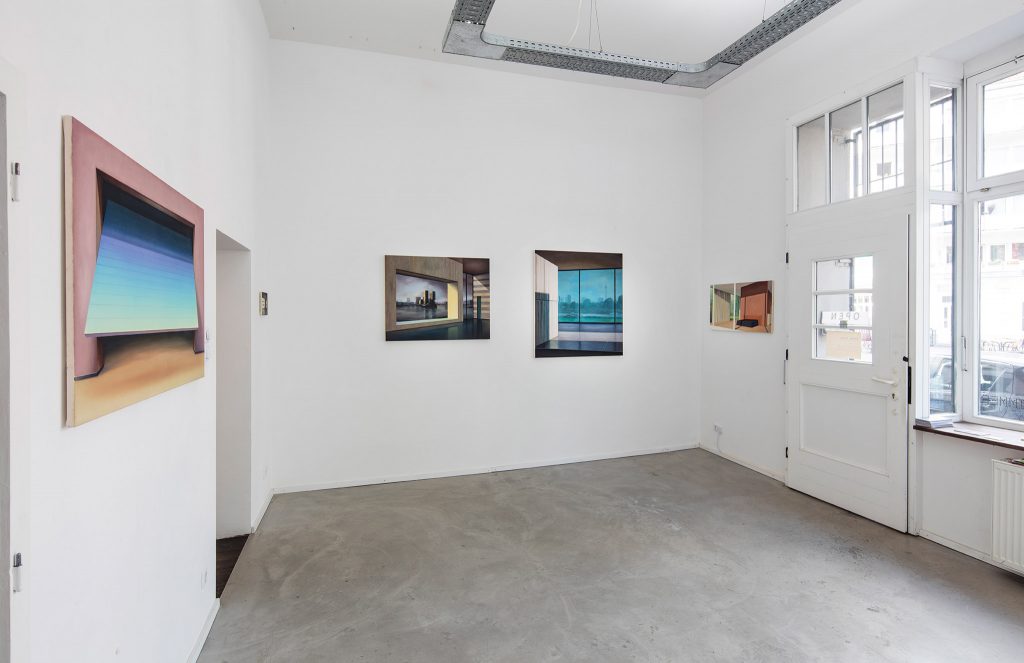 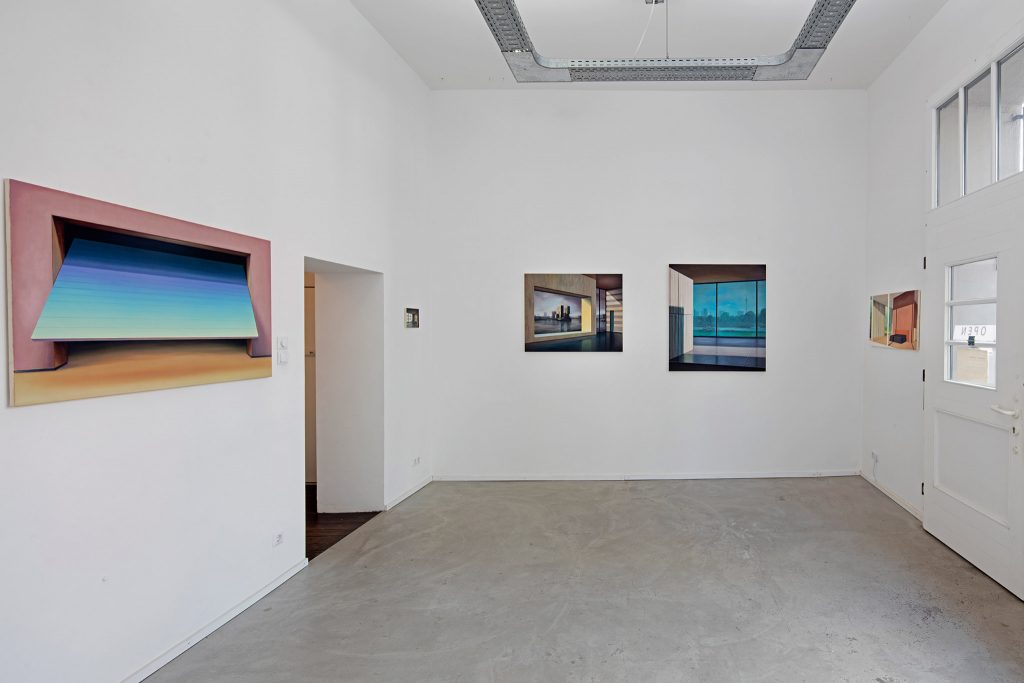 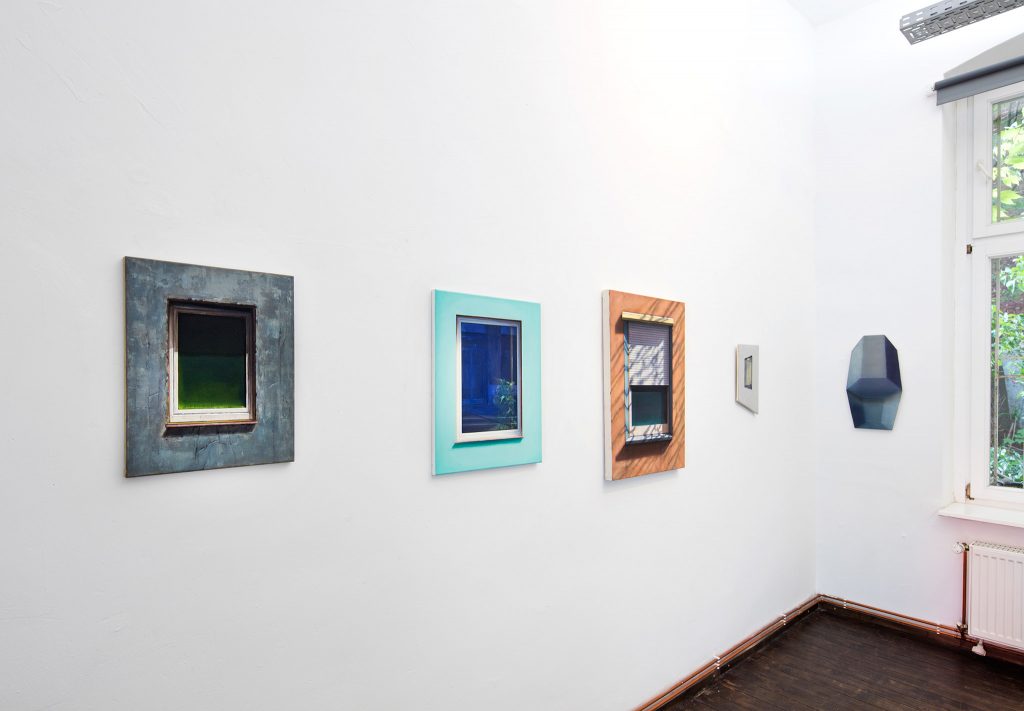 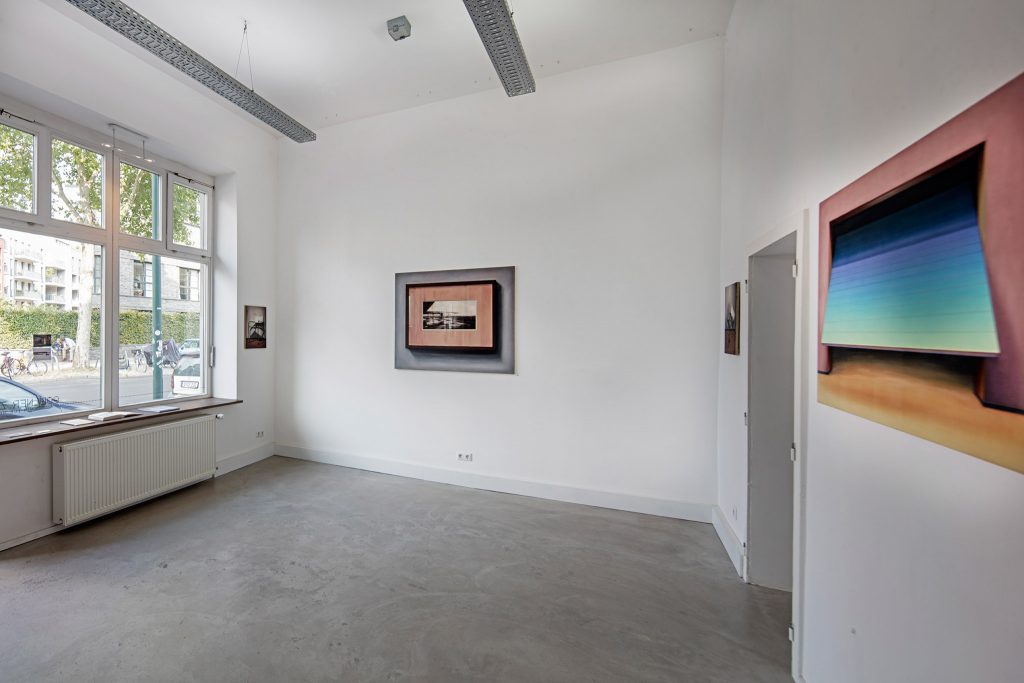 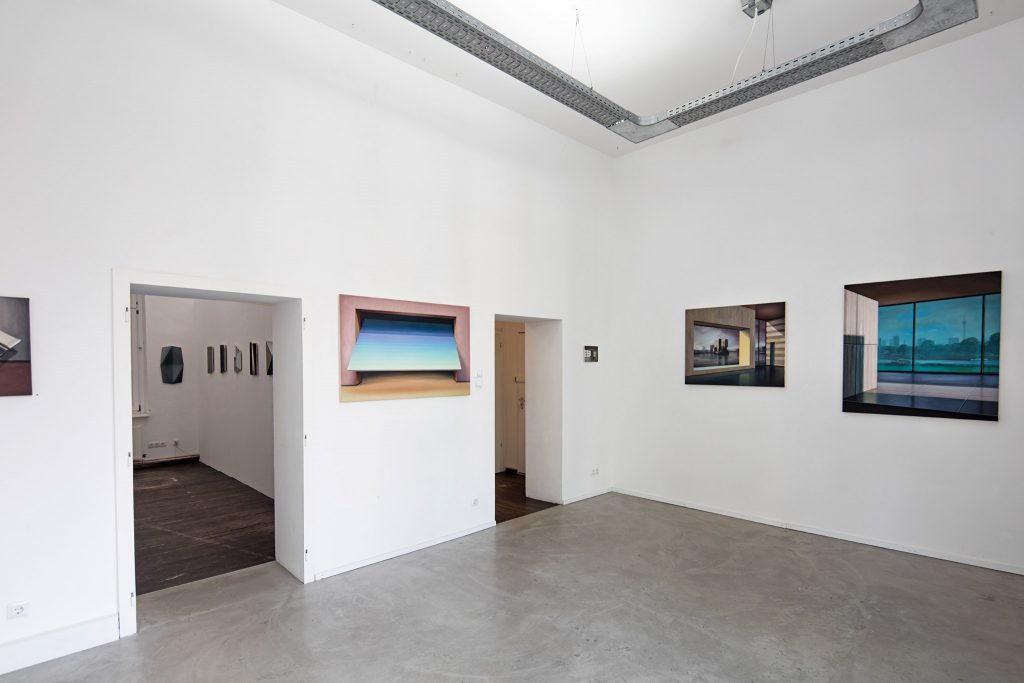 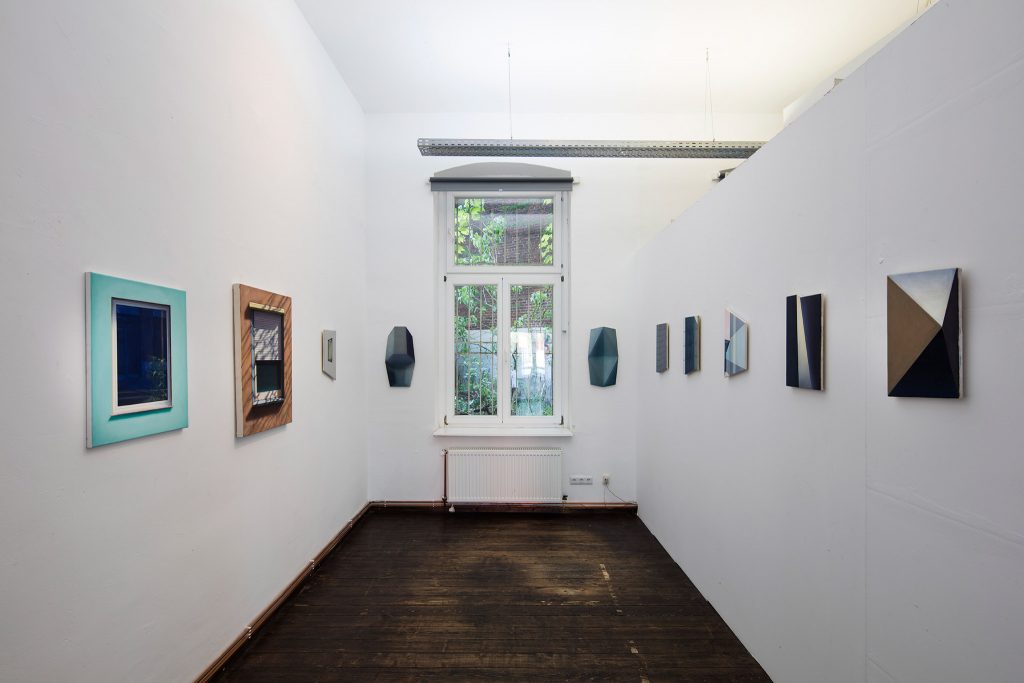 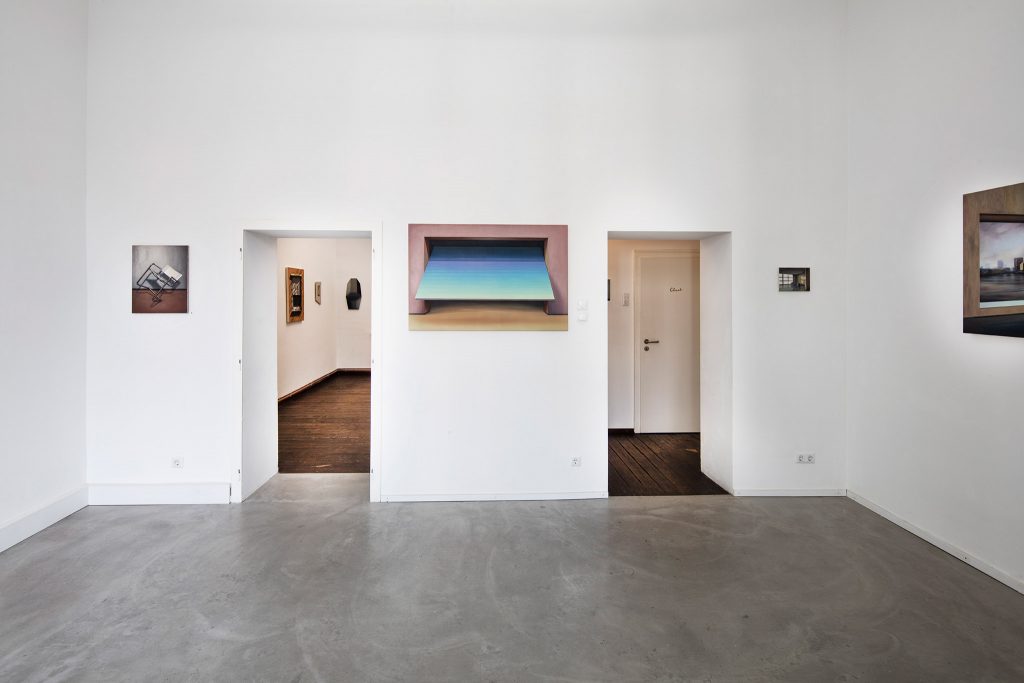 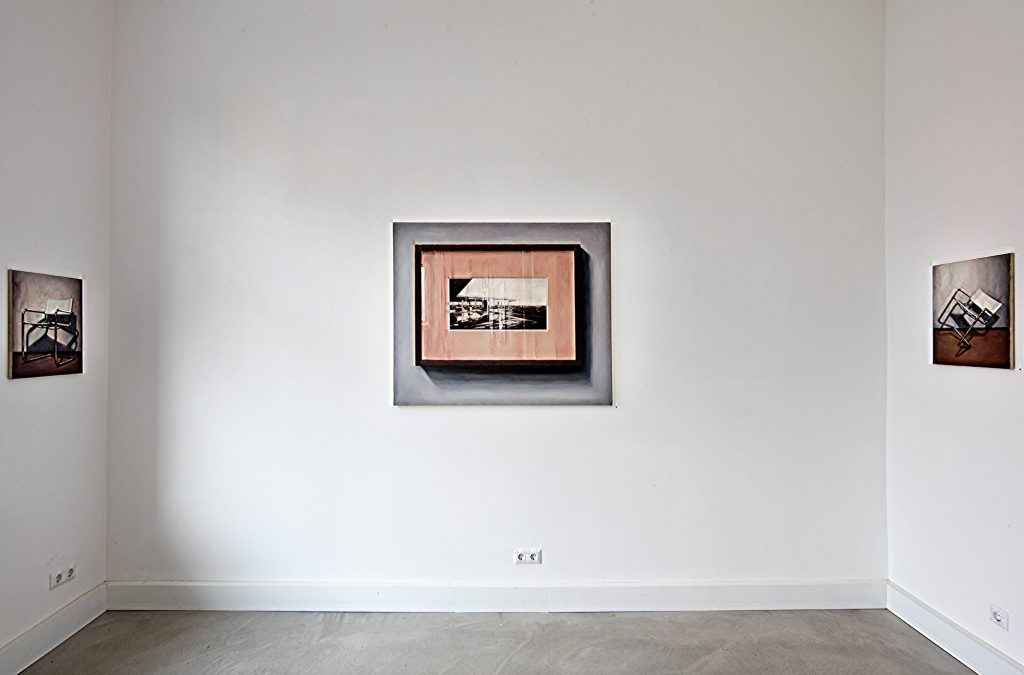