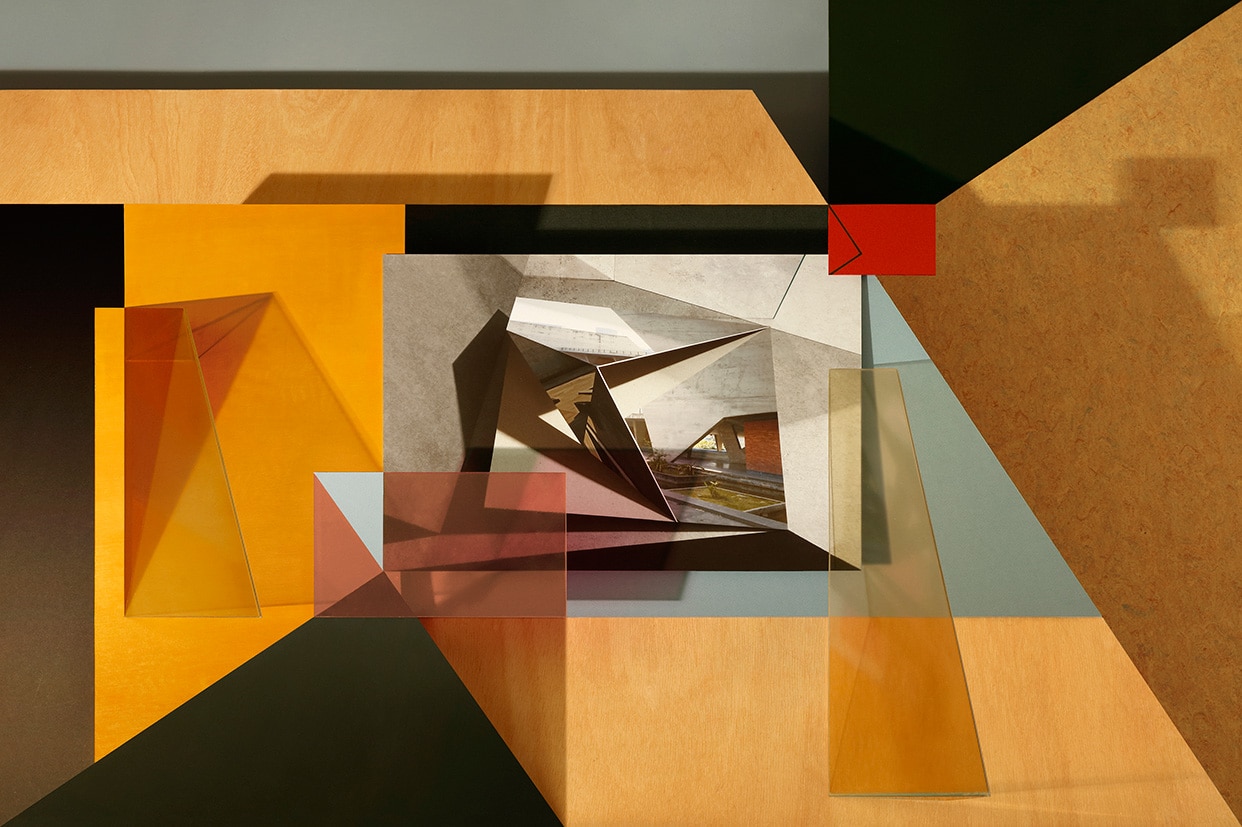 Spatial image or image-formed space?
About the works of Christine Erhard

Christine Erhard interacts within the medium of artistic photography. Conceptual work with her own medium, questions about its ability to produce images, and the exploration of how photography itself determines space are at the center of artistic questions at the interface between architecture, installation, and photography.

It is a constructed world built from photographic material that confronts the viewer in her works. The spatial reality depicted in them is one that initially refuses to be entered: it seems impossible to enter this space, which appears very fragile and delicate, as if it could shatter at any moment. This is paradoxical, because one is literally drawn into this strangely nested world, which makes one think of architectures of Constructivism, Brutalism, but also of Deconstructivism.

Where is up, where is down in this world of surfaces? How does space come into being? Indeed, in which two surfaces become orthogonal walls. But what happens when the wall, shifted in perspective, becomes the supporting ceiling? And how is this specially constructed space dissolved into its constituent parts, thus revealing its contradictory nature? Classical laws relating to the principle of supports and loads no longer apply without restriction. Since architectural modernism, the dynamization of space has always included its dissolution.

Erhard's photographs are created in her studio from three-dimensional models. These constitute the origin, not the image processing and manipulation on the computer. Shot meticulously and with a high degree of precision - and thus transferred back into an image - the impressions of another, constructed reality, based on the real built space, are created. This impression is reinforced by means of our perception through the play of areas of light and shadow that penetrate the overlapping image planes. In addition, in the medium of photography, the architectural space becomes a reproduced pictorial space that decisively shapes and determines our world of imagination.

The acronyms of the titles conceal another dimension. We know this from the everyday world of highly complex institutions that condense their functions in the abbreviations of their proper names from sequences of sounds and letters. Something similar happens with Christine Erhard's works: they point beyond themselves. Space becomes image and image becomes space.